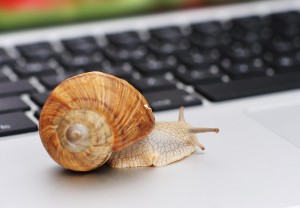 If there is one thing that is more frustrating than anything for even the casual PC user it is a slow computer. Having a slow computer at home is one thing, but if workplace computers are running slow it can mean down time and significant decreases in productivity which ultimately has a detrimental impact on a company’s bottom line. The vast majority of companies are not only dependent upon technology but they should be able to rely upon that technology running optimally on a consistent basis. The more a company can ensure that its computers are running smoothly the more its employees can achieve and the higher its profits will be. That said, there are some simple tips that can be followed in order to make computers run faster and thus increase productivity.

Get Rid of Unused Applications and Programs

Computers typically include several programs right out of the box that users may not ever use or need. These programs drain valuable memory from the system and usually run in the background as soon as the computer is booted up. Removing these programs can free up resources on the system and provide space which in turn will improve the computer’s speed and overall performance.

Upgrade to a Hard Drive with More Space

Getting rid of unused or unwanted programs is a great start for freeing up valuable system resources and increasing speed. However, if it is necessary to work on several files that need to be stored on the hard drive, the available space on that drive can get used up rather quickly. Most experts recommend that a minimum of 15% of the hard drive space should be left open in order for the computer to run as smoothly as possible. Any less than that and slowdowns in performance and speed begin to occur. Replacing current the computer’s current hard drive with a more spacious one can help fix the problem and will allow for more file storage and program usage without slowing down the system.

Low memory is notorious for causing reduced system performance. When users access several programs without having sufficient memory on their systems, the result is a much slower computer. Checking how much memory is being used on your system is simply a matter of going to the Performance Tab in the Task Manager (Ctrl+Alt+Delete) and determining if more RAM (random access memory) is necessary.

Even computer novices know that viruses are arguably a PC’s worst enemy. There may be nothing out there in the world of tech that slows a computer down or causes more damage to a system than a virus. If hard drive space and sufficient RAM are not the cause of reduced performance, then the problem may be that the PC is infected with a virus. Running a virus scan on a regular basis is highly recommended in order to keep computer systems protected and prevent viruses as well as other problems from occurring. System freeze-ups and file corruption are some of the other issues that can be caused by virus infections so it is advisable to not only run a virus scan regularly but to also have quality antivirus software installed on your system.

About The Local Circuit

Local Circuit has been providing computer repair, I.T. support and consulting services since 1998. We specialize in providing technology services and support to small businesses in north Texas and beyond. We support clients in a wide range of industries from manufacturing and private aviation to local municipalities and law enforcement agencies. Our mission is to leverage technology to increase our client's business outcomes.